Next: Building and running the App... 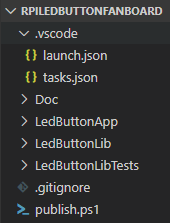 This was the projects that I created for the solution. There are three projects LEDButtonApp, LEDButtonLib and LEDButtonLibTests. The other files tasks.json, launch.json and publish.ps1 are scripts to build, publish (to the Raspberry Pi), and run the code. The remaining items are .gitignore for git and Doc which is where I would store all the documentation for GitHub.

This is the main executable. I decided to do this as a console app.

This is the library with the code that interfaces with the board.

I decided to write a set of unit tests for the library.

You can find the source here, but here are a few notes:

Next: [Building and running the App...][RPI-dotnet-build-and-run]