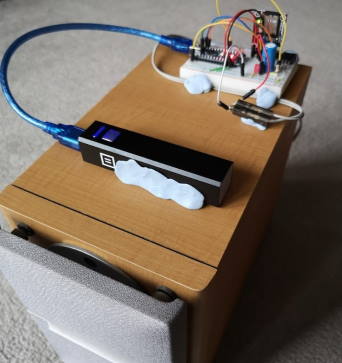 This is a small project to read wav files from a micro SD card via an Arduino Nano and then play them directly to a loudspeaker. I'll state upfront that this isn't the easiest way to do this (there are MP3 modules and libraries), but I wanted to:

As an idea of the sort of thing I was thinking of - I've been thinking of a DIY "ring" doorbell. I already have a camera that can see anyone approaching the front door. A 433.92MHz receiver could detect when the doorbell is pressed (so no new doorbell required). A Raspberry Pi (i.e. the one with the camera) controlling it all and sending and receiving to my mobile phone. A lot more work than just buying a Ring doorbell - but a lot more satisfying!

To drive the loudspeaker I used a power MOSFET. Ideally I would use two (or maybe four) MOSFETs in a push pull arrangement. I was more interested in getting the software right however, so I didn't spend a lot of time getting the hardware correct. Figure 3 on this page would seem be the ideal solution, but I suspect that if I went down this route it would need four independently controllable PWM inputs - and having given this a bit of thought - I think this would be best done with an FPGA. That's a project for another day! (but it would be pretty awesome). ...or maybe I'll just buy an audio amplifier module from Aliexpress :) 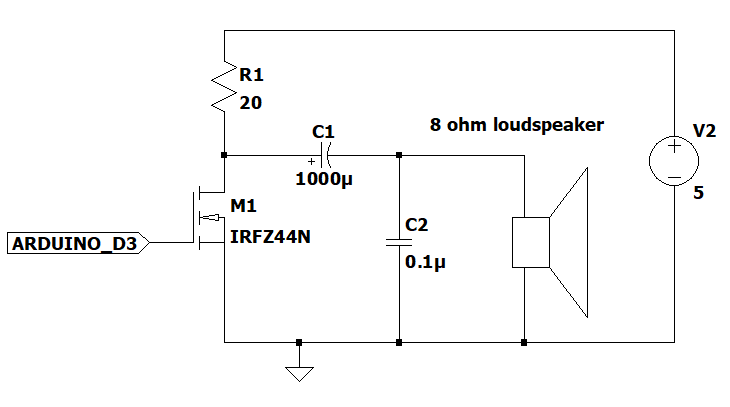 ...and an SD card module for the Arduino. They cost about 50p if you get them directly from China.

I haven't included the SD card reading code here (because it's not the reason for this article), but the entire sketch can be be found on this github repo.

There seems to be lots of noise in the background of both tracks - but it was raining very hard outside when I recorded them - so it might be that.

I created the WAV files using Audacity - 8 bit @ 16,000 samples per second - which works out to about 1 MByte / minute. I'll be the first to admit it's not HiFi quality - but it's not bad considering how it's being generated (well I think anyway :))

I did some tests and found that I could read the data from the SD card about 7 times faster than I needed it.

Therefore I should be able to do stereo (although I'm not sure what the point would be) but I would need another PWM channel.